Here at exercise4pets, we make sure we give our customers the best deals possible
Check out our latest offers 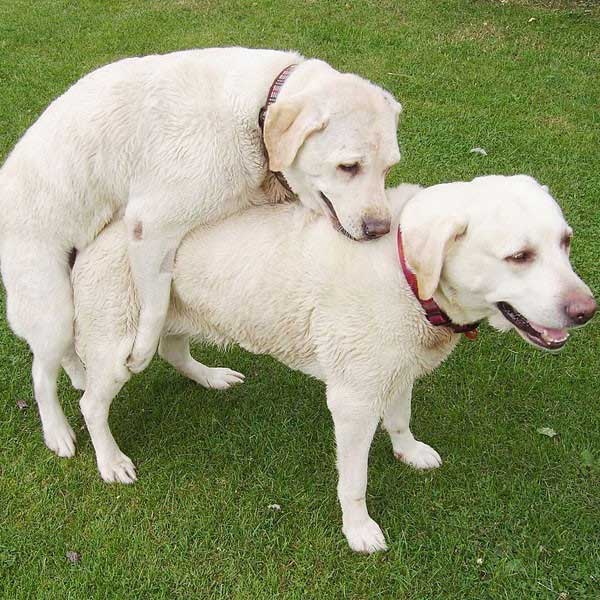 Whilst researching how best to deal with this issue in the pack, I came across a great article  in the Whole Dog Journal. Please see below.

Luke, at age two, had been practicing his mounting behavior for many months. In addition, as a mostly Cattle Dog, he was assertive and controlling. When Shane attempted to voice his objections, Luke let him know that he would brook no resistance. Shane, a Shepherd/Husky mix, also had an assertive personality, so rather than backing down in the face of Luke’s assertions of dominance, he fought back. Neither dog was willing to say “Lassie,” and so the battles escalated.

In contrast, we later introduced Shane to a somewhat timid but playful four-month-old Lab puppy. Dunkin also attempted to mount Shane in puppy playfulness. But when Shane snapped at Dunkin, the pup backed off apologetically; in a short time the two were playing together, with only occasional puppy attempts to mount, which were quickly quelled by a dirty look from the older dog. No harm, no foul.

Similarly, you will need to work harder to convince your adult, well-practiced dog to quit climbing on other dogs than you will a young pup, and there’s more potential for aggression if the recipient of unwanted attentions objects.

With both young and mature dogs, you can use time-outs to let your dog know that mounting behavior makes all fun stop. A tab (short, 4- to 6-inch piece of leash) or a drag-line (a 4- to 6-foot light nylon cord) attached to your dog’s collar can make enforcement of time-outs faster and more effective when you have to separate dogs – as well as safer.

Set your dog up for a play date with an understanding friend who has an understanding dog. Try to find a safely fenced but neutral play yard, so that home team advantage doesn’t play a role. If a neutral yard isn’t available, the friend’s yard is better than your own, and outdoors is definitely preferable to indoors.

When you turn the dogs out together, watch yours closely. It’s a good idea to have some tools on hand to break up a fight, should one occur.

If there’s no sign of mounting, let them play. Be ready to intervene if you see the beginning signs of mounting behavior in your dog. This usually occurs as play escalates and arousal increases, if it didn’t happen at the get-go.

As a first line of defense, try subtle body-blocking. Every time your dog approaches the other with obvious mounting body postures, step calmly in front of your dog to block him. If you’re skilled, you may be able to simply lean your body forward or thrust out a hip or knee to send him the message that the fun’s about to stop. This is more likely to work with a younger dog, who is likely to be less intense about his intent to mount. Be sure not to intervene if your dog appears to be planning appropriate canine play.

Some dogs get overexcited and physically accost people when greeting. The owner should work on a basic “good manners” greeting, using a short leash or tether to prevent the dog from greeting the person unless he’s politely sitting down.

If body blocking doesn’t work, as gently and unobtrusively as possible, grasp your tab or light line, then cheerfully announce, “Time out!” and lead your dog to a quiet corner of the play yard. Sit with him there until you can tell that his arousal level has diminished, and then release him to return to his playmate. If necessary, have your friend restrain her dog at the same time so he doesn’t come pestering yours during the time out.

Keep in mind that the earlier you intervene in the mounting behavior sequence, the more effective the intervention, since your dog has not had time to get fully involved in the behavior. Also, it’s important that you stay calm and cheerful about the modification program. Yelling at or physically correcting your dog increases the stress level in the environment, making a fight more likely, not less.

With enough repetitions, most dogs will give up the mounting, at least for the time being. With an older dog for whom the habit is well ingrained, you may need to repeat your time-outs with each new play session, and you may need to restrict his playmates to those who won’t take offense to his persistently rude behavior. With a pup or juvenile, the behavior should extinguish fairly easily with repeated time outs, especially if he is neutered. Just keep an eye out for “spontaneous recovery,” when a behavior you think has been extinguished returns unexpectedly. Quick re-intervention with body blocks or time-outs should put the mounting to rest again.

Need help taking care of your dog?
Get In Touch